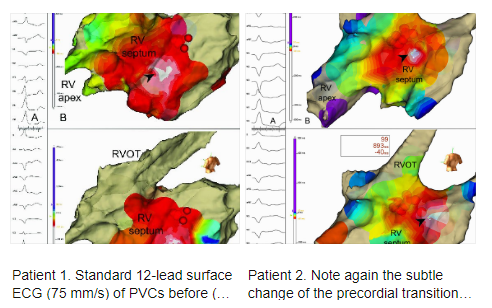 Case series presentation: Three patients (2 males) underwent electroanatomical mapping and catheter ablation for idiopathic premature ventricular contractions originating near the His bundle. Patients underwent 24-h ECG Holter monitoring during follow-up. All patients had premature ventricular contractions with left bundle branch block morphology and inferior or horizontal axis. However, change of QRS morphology during ablation was observed, due to a change in the exit site. In two patients there was reduction of the arrhythmia burden after initially unsuccessful procedure. Mapping and ablation in the aortic root were needed in one patient. There were no complications.

Discussion: Radiofrequency catheter ablation of para-Hisian ventricular arrhythmias is feasible and safe when performed cautiously. A change in the premature ventricular contractions’ morphology and exit site during ablation may ensue; therefore, extensive mapping on both sides of the interventricular septum as well as in the aortic root may be warranted.